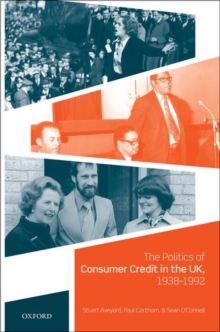 As early as the 1930s, Britain had a highly innovative and profitable mortgage sector that promoted a major extension in home ownership.

These controversial and risky offerings had an equivalent in numerous hire purchase agreements, with which new homes were furnished.

Such developments were forerunners of the 'easy credit' regime more commonly associated with the 1980s.

Taking a long-term perspective on this issue indicates that Britain's departure from Europeanmodels of consumer credit markets was not simply a by-product of neoliberalism's influence on the Thatcher administration, and this book offers a much fuller explanation to the phenomenon.

It explores debates within and between the major political parties; reveals the infighting amongst civil servicedepartments over management of consumer demand; charts the varying degrees of influence wielded by the Bank of England and finance capital, as opposed to that of consumer durable manufacturers; reviews the perspectives of consumers and their representatives; and explains the role of contingency and path dependency in these historical events. The central focus of this book is on consumer credit, but this subject provides a case study through which to explore numerous other important areas of British history.

These include debates on the issues of post-war consensus, the impact of rising home ownership and its impact on consumer credit and personal finance markets, the management of consumer society, political responses to affluence, the development of consumer protection policy, and the influence of neoliberalism.