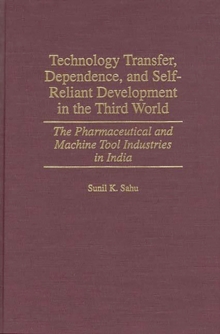 Technology Transfer, Dependence, and Self-Reliant Development in the Third World : The Pharmaceutical and Machine Tool Industries in India Hardback

To understand technological dependence and self-reliance in the manufacturing industries of the Third World, Sahu tests the main propositions of the two theories on technology transfer.

He focuses particularly on understanding the shifting bargaining power of the multinationals, the state and private national capital; the process of acquisition, assimilation, adaptation, and generation of technology at the firm level; the role of the public sector and state regulations and control in the development of technological capability and self-reliant development; the conditions-domestic and international-that allow a developing country to move from a situation of dependency to self-reliance; and the phenomenon of reverse flow of technology from the Third World. According to Sahu, dependency theory is inadequate because of its structural mode of analysis, which portrays dependency as a determinant international structure rather than as a set of shifting constraints within which states seek to maneuver.

Though its single-cause explanation of technological dependence in the Third World is helpful in explaining the phenomenon of the technological gap between India and its technology suppliers, it does not explain the growing bargaining power of the state and the national capital vis-a-vis multinationals in the last two decades.

But according to Professor Sahu, the more sophisticated and dynamic bargaining framework, which considers dependency to be one of the many possible outcomes of technology transfer, helps researchers better understand the changing situations of developing countries, particularly the Indian situation since the early 1970s.