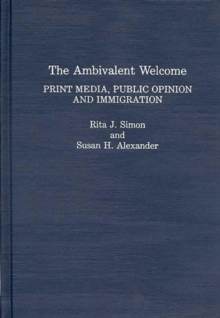 The Ambivalent Welcome describes how leading magazines and the New York Times covered and interpreted U.S. immigration policy, and public attitudes about the impact of immigrants on the American economy and social fabric.

Rita J. Simon and Susan H. Alexander examine print media coverage of immigration issues from 1880, the onset of the new immigration, to the present, and find that most magazines, like most Americans, have vehemently opposed new immigrants. Part One begins with a chapter providing statistics on the number of immigrants and refugees by country of origin from 1810 to 1990, and estimates of the number of illegals who have entered the United States.

Chapter 2 discusses U.S. immigration acts and summarizes the major political party platforms on immigration from the mid-nineteenth century through the present.

Results of all national poll data regarding immigrants and refugees since the availability of such data (1930s) are reported in Chapter 3.

News and World Report, and the editorials of the New York Times.

Following a summary chapter, Appendix A provides a profile of each of the magazines, including the date of its founding, its editors and publishers, circulation, characteristics of its readers, and an assessment of its influence on immigration.