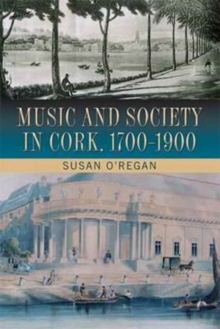 This book presents, for the first time, an in-depth and wide-ranging study of public musical life in Cork from the early eighteenth century to the end of the nineteenth century.

Local professionals collaborated with touring performers in sustaining a vibrant concert life, to which military and yeomanry bands frequently contributed.

The cathedral of St Fin Barre maintained a core of professionals who were influential teachers and performers in the city.

In the politically charged environment following the Act of Union, a growing sense of Irish identity through awareness of Ireland's past was evident in the proliferation of songs by Thomas Moore and the appearance of the Irish harp in concerts.

These featured alongside excerpts from Italian opera, English glees, and the virtuosic offerings of touring composer-performers, notably Paganini and Liszt.

Despite political and sectarian tensions, choral societies emerged as a key element of middle-class sociability during the late nineteenth century.

Musical structures in the city's new Catholic churches, a municipal school of music, and a new opera house were amongst the late nineteenth century developments that marked music as a vital strand in Cork's expanding social and civic life.