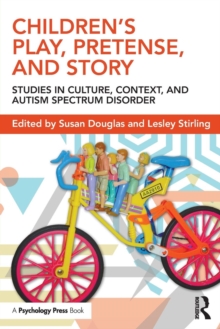 At the heart of this volume is the recognition that children's engagement with play and story are intrinsically and intricately linked.

The contributing authors share a passionate interest in the development and well-being of children, in particular through their use of imagination and adaptation of the everyday into play and stories.

Following these principles, the volume explores the connections between play, story, and pretense with regard to many cultural and contextual factors that influence the way these elements vary in children's lives.

In a departure from earlier collections on play and story, the authors take a particular focus on normative as compared with atypical development.

This collection begins with an approach to understanding the developmental relationship between play and story, which recognizes their similarities while acknowledging their differences.

Much of the collection addresses pretend play and story in children with autism spectrum disorder, an understudied but important group for consideration, as these dimensions of their lives and development have often been considered problematic.

The volume also includes sections on play and story in classroom settings and play and story across cultures, including non-English-speaking environments such as Israel, Romania, China, and Mexico.

It concludes with a discussion of how play differs across sociocultural and economic contexts, making a unifying claim for the importance of play in children's lives but also calling for an understanding of what play means to very different groups of children.