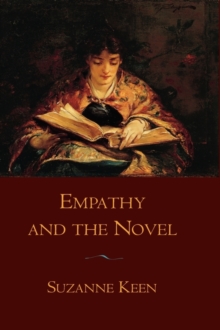 Empathy and the Novel Hardback

Does reading novels evoking empathy with fictional characters really cultivate our sympathetic imagination and lead to altruistic actions on behalf of real others?

Empathy and the Novel presents a comprehensive account of the relationships among novel reading, empathy, and altruism.

Though readers' and authors' empathy certainly contribute to the emotional resonance of fiction and its success in the marketplace, Keen finds the case for altruisticconsequences of novel reading inconclusive (and exaggerated by defenders of literary reading).

She offers instead a detailed theory of narrative empathy, with proposals about its deployment by novelists and its results in readers.

Empathy and the Novel engages with neuroscience and contemporary psychological research onempathy, bringing affect to the center of cognitive literary studies' scrutiny of narrative fiction. Drawing on narrative theory, literary history, philosophy, and contemporary scholarship in discourse processing, Keen brings together resources and challenges for the literary study of empathy and the psychological study of fiction reading.

Empathy robustly enters into affective responses to fiction, but its proper role in shaping the behavior of emotional readers has been debated for three centuries.

She argues that above all readers' perception of a text's fictiveness increases the likelihood of readers' empathy, by releasing readers from their guarded responses to the demands of real others.

She confirms the centrality of narrative empathy asa strategy, as well as a subject, of contemporary novelists.

Despite the disrepute of putative human universals, novelists from around the world endorse the notion of shared human emotions when they overtly call upon their readers' empathy.

Consequently, Keen suggests, if narrative empathy is to be better understood, then women's reading and popular fiction must be accorded the respect of experimental inquiry.