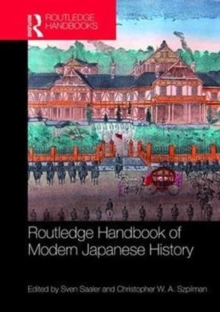 The Routledge Handbook of Modern Japanese History is a concise overview of modern Japanese history from the middle of the nineteenth century until the end of the twentieth century.

Written by a group of international historians, each an authority in his or her field, the book covers modern Japanese history in an accessible yet comprehensive manner.

The subjects featured in the book range from the development of the political system and matters of international relations, to social and economic history and gender issues, to post-war discussions about modern Japan's historical trajectory and its wartime past.

Divided into thematic parts, the sections include:Nation, empire and bordersIdeologies and the political systemEconomy and societyHistorical legacies and memoryEach chapter outlines important historiographical debates and controversies, summarizes the latest developments in the field, and identifies research topics that have not yet received sufficient scholarly attention.

As such, the book will be useful to students and scholars of Japanese history, Asian history and Asian Studies.