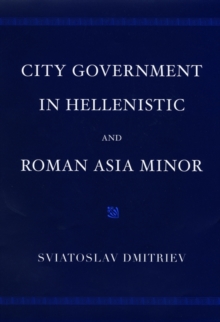 City Government in Hellenistic and Roman Asia Minor examines the social and administrative transformation of Greek society within the early Roman empire, assessing the extent to which the numerous changes in Greek cities during the imperial period ought to be attributed to Roman influence.

The topic is crucial to our understanding of the foundations of Roman imperial power because Greek speakers comprised the empire's second largest population group andplayed a vital role in its administration, culture, and social life. This book elucidates the transformation of Greek society in this period from a local point of view, mostly through the study of local sources such as inscriptions and coins.

By providing information on public activities, education, family connections, and individual careers, it shows the extent of and geographical variation in Greek provincial reaction to the changes accompanying the establishment of Roman rule.

In general, new local administrative and social developments during the periodwere most heavily influenced by traditional pre-Roman practices, while innovations were few and of limited importance. Concentrating on the province of Asia, one of the most urbanized Greek-speaking provinces of Rome, this work demonstrates that Greek local administration remained diverse under the Romans, while at the same time local Greek nobility gradually merged with the Roman ruling class into one imperial elite.

This conclusion interprets the interference of Roman authorities in local administration as a form of interaction between different segments of the imperial elite, rejecting the old explanationof such interference as a display of Roman control over subjects.