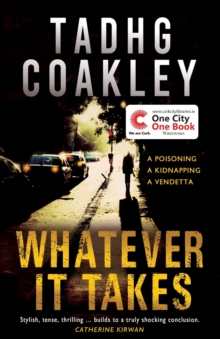 Whatever it Takes Paperback / softback

Unwilling to accept the human degradation caused by Molloy's drugs, violence and prostitution.

He has made up his mind to bring Molloy down, but just how far is he willing to go to make that happen?

What is he willing to do and what fall-out will ensue for himself and his garda colleagues?

This tense crime novel (the first in a series featuring Collins) tells the story of two immovable forces colliding.

Something has to give. Running out of time before the murder of two teenagers becomes inevitable, and with a traitor in the garda station feeding information back to Molloy, Collins takes his battle to new heights.

He is determined to win, whatever the cost, whatever it takes.