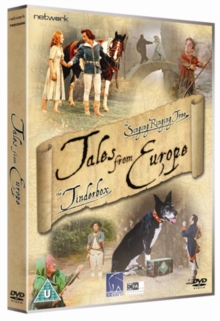 Tales from Europe: The Singing Ringing Tree and the Tinderbox DVD

A double bill of classic fairy tales. 'The Singing Ringing Tree' is the original uncut version with English narration that was added in 1964.

A young prince sets out to find the Singing Ringing Tree in order to win the love of a beautiful but conceited princess.

He finds it in a garden ruled by an evil dwarf, who says that the prince can have the tree on the condition that he wins the princess' love before nightfall; if he fails, he will turn into a bear.

Whilst in 'The Tinderbox', returning from battle, an impoverished soldier meets a witch who offers him gold in return for him recovering an old tinderbox from a hollow tree.

The soldier complies, but following a quarrel with the witch makes off with both tinderbox and gold.

Although his new-found wealth initially wins the soldier many friends, the money will not last for ever.