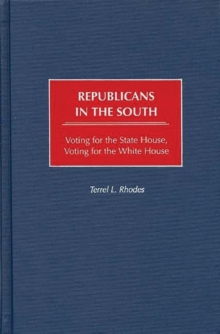 As a result of national political and judicial actions, the political landscape of the South has experienced a partisan realignment from the Democratic to the Republican party.

At the same time, the South has continued to have a tremendous impact on the national agenda through continued dominance of the national political scene through its new allegiance to the Republican party and has been instrumental in the rise of the Republican party nationally. However, as Rhodes makes clear in this analysis, the realignment has not been uniform among the states of the region, nor has it led to the demise of the Democratic party.

Although the Republican realignment appears to continue to trickle down to the local and state legislative levels, the Democratic party remains competitive across the South in most arenas.

Rhodes suggests that the increasing wealth and suburbanization of the South strengthens the Republican presence and the party has maximized its growth in the South to a level of competitiveness at most electoral levels.

Nonetheless, issues that have characterized politics in the South in the past-race, gender, class, and religion-continue to permeate the new politics of the South.

An important analysis for scholars, students, and other researchers involved with Southern and party politics.