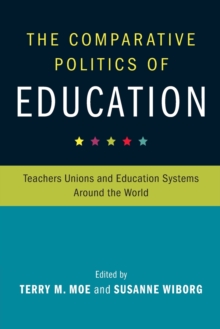 The Comparative Politics of Education : Teachers Unions and Education Systems around the World Paperback / softback

Public education is critically important to the human capital, social well-being, and economic prosperity of nations.

It is also an intensely political realm of public policy that is heavily shaped by power and special interests.

This volume attempts to change that by promoting the development of a coherent, thriving field on the comparative politics of education.

As an opening wedge, the authors carry out an 11-nation comparative study of the political role of teachers unions, showing that as education systems everywhere became institutionalized, teachers unions pursued their interests by becoming well-organized, politically active, highly influential - and during the modern era, the main opponents of neoliberal reform.

Across diverse nations, the commonalities are striking.

The challenge going forward is to expand on this study's scope, theory, and evidence to bring education into the heart of comparative politics.