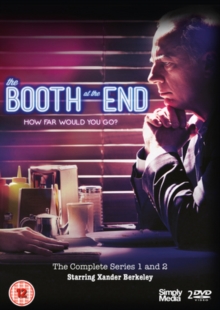 The Booth at the End: The Complete Series 1 and 2 DVD

In a booth of Cadillac Jack's diner sits a man (Berkeley) awaiting his next client.

As each client approaches, giving a passcode on entry to the booth, they describe to the man a situation that they need resolving including curing a man's son of leukaemia, an old lady's husband of Alzheimer's and providing a lonely man with the woman of his dreams.

The man then provides them with a task to carry out, on completion of which their problem will be fixed.

The tasks include bombing a family restaurant, murdering a little girl and finding a missing person.

Series 1 episodes are: 'Start. See What Happens', 'What One Begins, One Must Finish', 'How You Do It Is Up to You', 'I Have My Reasons' and 'Our Deal Here Is Done'.

Series 2 episodes are: 'There Are Consequences', 'A New Reality', 'It's Not Supposed to Be Easy', 'The Rules of the Game' and 'Nothing More, Nothing Less'.