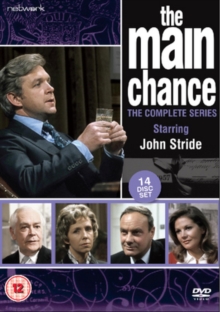 All the episodes from the TV drama series that follows lawyer David Main (John Stride) as he moves back to Leeds to set up a practice after years of high-flying success in London.

Intending to establish his own business empire in his home town, Main quickly sets about cultivating his contacts with the city's great and good.

But having come up the hard way himself, he's also prepared to reach out to help those less fortunate.

Series 1 episodes are: 'What About Justice?', 'Body and Soul', 'The Professional', 'Liar's Dice', 'The Privilege of Justice' and 'With All My Worldly Goods'.

Series 2 episodes are: 'A Time to Love, a Time to Die', 'It Could Happen to You', 'First You Eat - Later We Ruin You', 'A Little Black and White Lie', 'The Walls of Jericho', 'A View from the Chair', 'The Best Legal System in the World', 'The Piper Calls the Tune', 'A Man I Know to Be Innocent', 'A Vision of the Future', 'The Lady Who Went Too Far', 'Settlement Day' and 'Private Armies'.