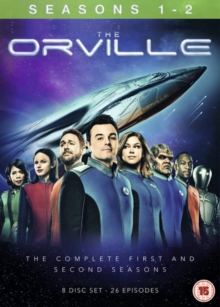 All the episodes from the first two seasons of the American comedy set 400 years in the future which follows the adventures of an exploratory space vessel named The Orville.

The ship's captain, Ed Mercer (Seth MacFarlane), is able to finally fulfil his dreams of leading a crew on various missions through space when the Planetary Union exhausts all other suitable options.

Despite his lack of competency, Ed gets to work on ingratiating himself with his team and immersing himself in his new role, only to be blindsided by the arrival of his ex-wife, Kelly Grayson (Adrianne Palicki), who will be assuming the role of his First Officer.