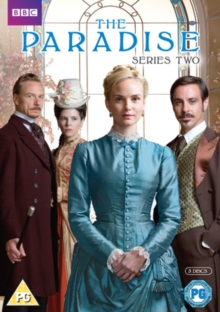 All eight episodes from the second series of the BBC Victorian costume drama adapted from the novel 'Au Bonheur des Dames' by Émile Zola.

Set in a north of England town, the show follows shopworker Denise Lovett (Joanna Vanderham) as she struggles to make her way to the top after managing to gain a lowly position as a salesgirl at 'The Paradise', the town's newly opened upmarket department store.

In this series, a year has past and Moray (Emun Elliott) has been exiled to Paris after breaking off his engagement to Katherine (Elaine Cassidy).

Following the death of her father, Katherine and her new husband Tom Weston (Ben Daniels) are now the owners of The Paradise.

Tom plans to sell the store which has been struggling to survive in Moray's absence.

When he returns at Katherine's request, Moray finds he has his work cut out to restore The Paradise to its former glory.

Meanwhile, he and Denise continue their romance but the future of their relationship remains uncertain.