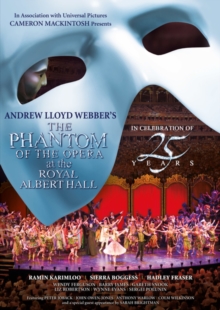 A live performance from the Royal Albert Hall celebrating the 25th anniversary of Andrew Lloyd Webber's popular musical, based on the novel by Gaston Leroux.

Lavishly staged, this first release of the hugely successful stage version stars Ramin Karimloo as the disfigured musical genius 'The Phantom', whose terrorising of the Paris Opera changes when he falls in love with 'Christine' (Sierra Boggess).