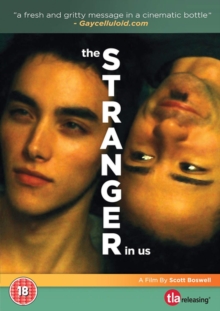 The Stranger in Us DVD

Drama following the unusual friendship that develops between two young men who find themselves caught up in the seedier side of San Francisco life.

Anthony (Raphael Barker) is a poet and a dreamer. Having moved to San Francisco to be closer to his boyfriend, Stephen (Scott Cox), his prospects take a turn for the worse when his lover, rather than welcoming him, begins to abuse him.

Distraught and seeking a way out of the relationship, Anthony increasingly finds himself wandering the streets of San Francisco at night.

Here he meets Gavin (Adam Perez), a homeless teenager who takes the less street-savvy Anthony under his wing.

The two become close, however life on the streets is fraught with danger.

Will the pair's burgeoning friendship survive the turmoil they face as they try to carve a stable future from the chaos of the present?