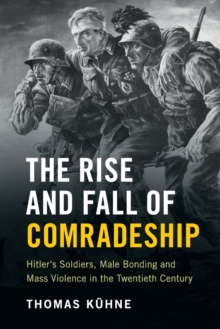 The Rise and Fall of Comradeship : Hitler's Soldiers, Male Bonding and Mass Violence in the Twentieth Century Paperback / softback

This is an innovative account of how the concept of comradeship shaped the actions, emotions and ideas of ordinary German soldiers across the two world wars and during the Holocaust.

Using individual soldiers' diaries, personal letters and memoirs, Kuhne reveals the ways in which soldiers' longing for community, and the practice of male bonding and togetherness, sustained the Third Reich's pursuit of war and genocide.

Comradeship fuelled the soldiers' fighting morale. It also propelled these soldiers forward into war crimes and acts of mass murders.

Yet, by practising comradeship, the soldiers could maintain the myth that they were morally sacrosanct.

Post-1945, the notion of kameradschaft as the epitome of humane and egalitarian solidarity allowed Hitler's soldiers to join the euphoria for peace and democracy in the Federal Republic, finally shaping popular memories of the war through the end of the twentieth century.