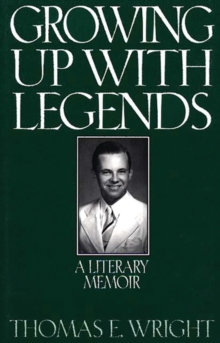 Growing Up with Legends : A Literary Memoir Hardback

In this evocative and engaging memoir, Thomas Wright recalls, with eloquence, frankness, and humor, a man coming to terms with his homosexuality and seeking his happiness in ignorant and repressive times.

Throughout his life and in his travels, Wright gathered a distinguished circle of friends that included some of the most influential writers of the mid-20th century, among them Tennessee Williams, Paul Bowles, and Christopher Isherwood.

Scion of an old Louisiana family, Wright left the South after college to live in the scintillating Manhattan of the late 1940s.

Stimulated by the Columbia University of Trilling and Van Doren, he went on to develop lasting friendships with Allen and Caroline Tate, Tennessee Williams, and socialized with William Inge, Chester Kallman, Speed Lankin, Bill Goyen, Carson McCullers' family, and Harold Norse. Wright moved to southern California in the 1950s to become a writer.

There he became intimate with Christopher Isherwood and Edward James (the purported son of Edward VII of England), enabling him to move in circles that included Igor Stravinsky, Gerald Heard, and Aldous Huxley.

In the 1960s he began his travels, moving first to Mexico, then to Europe and on to Morocco, where he became a confidante of Paul Bowles.

By the mid-1970s Wright began traveling again, moving throughout Latin America and finally settling in Guatemala where he now resides.

Wright's honest treatment of his homosexuality and personal remembrances of the literary legends he befriended will inspire and fascinate readers.