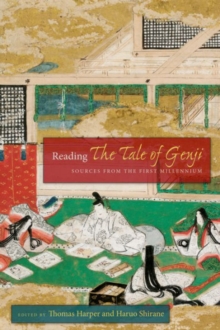 Reading The Tale of Genji : Sources from the First Millennium Hardback

The Tale of Genji, written one thousand years ago, is a masterpiece of Japanese literature, is often regarded as the best prose fiction in the language.

Read, commented on, and reimagined by poets, scholars, dramatists, artists, and novelists, the tale has left a legacy as rich and reflective as the work itself.

This sourcebook is the most comprehensive record of the reception of The Tale of Genji to date.

It presents a range of landmark texts relating to the work during its first millennium, almost all of which are translated into English for the first time.

An introduction prefaces each set of documents, situating them within the tradition of Japanese literature and cultural history.

These texts provide a fascinating glimpse into Japanese views of literature, poetry, imperial politics, and the place of art and women in society.

Selections include an imagined conversation among court ladies gossiping about their favorite characters and scenes in Genji; learned exegetical commentary; a vigorous debate over the morality of Genji; and an impassioned defense of Genji's ability to enhance Japan's standing among the twentieth century's community of nations. Taken together, these documents reflect Japan's fraught history with vernacular texts, particularly those written by women.