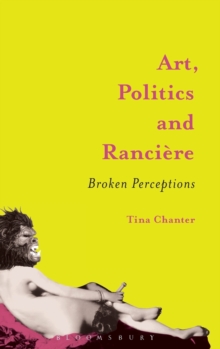 Even those who take themselves to be breaking from tradition-from the metaphysical tradition of philosophy, from grand narratives, neoliberalism or Eurocentrism-can remain blindly attached to them.

Art, Politics and Ranciere: Broken Perspectives provides an account of how works of art can, but do not necessarily, interrupt dominant narratives. Inspired by Jacques Ranciere, Tina Chanter assumes his work as a starting point.

She presents a rigorous and appreciative critique of Ranciere's story of aesthetics, paying close attention to gender and race.

Along with the relationship between the unconscious and the political, perception is a key theme throughout, used to address questions such as 'How do some things become visible, while other things remain invisible?' 'What does it take for something to be seen, and why do other things elude visibility?' Alongside illuminating discussions of Ranciere, Heidegger and Levinas are informed accounts of artists Ingrid Mwangi, Phillip Noyce, Ingrid Pollard, and Gillian Wearing.

Outlining the basis of a new political aesthetic, Art, Politics and Ranciere develops an original philosophical consideration that is sensitive to race and gender, yet not reducible to these concerns.