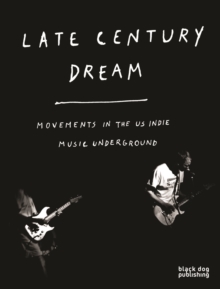 Late Century Dream: Movements in the US Indie Music Underground looks in detail at a number of regional music scenes in the US independent music underground through the fertile years of the 1980s and 90s, encompassing many different genres under the DIY banner. Featuring newly commissioned essays and extended appendices of new interview and oral material, Late Century Dream takes a fresh, focused look at both lesser-reported aspects of familiar movements and in cities and regions with little or no prior discussion around their music scene. These include: the grunge scene in the Pacific Northwest, by way of progenitors such as Green River and Mudhoney, and other lesserknown but influential groups such as TAD and Skinyard; the early-90s post-hardcore/early screamo scene which sprang up around Gravity Records in San Diego, including Heroin, Antioch Arrow and many others; the legacy of the Butthole Surfers and the development of the punk scene in Texas which encompassed groups such as The Dicks and Big Boys; the unpredictable, idiosyncratic Phoenix, Arizona scene featuring such baffling and memorable bands as Meat Puppets, Sun City Girls, JFA and the Feederz; and the three phases of Chapel Hill music, from the mid-80s tail end of proto-indie, through the legendary college-rock boom encompassing bands like Superchunk and Archers of Loaf, to late-90s iterations spearheaded by groups such as the White Octave. Divided simply into chapters focusing on each different region or city, the book is also illustrated with a wealth of archival and unseen promo, live and 'zine imagery.