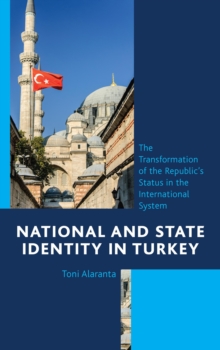 National and State Identity in Turkey : The Transformation of the Republic's Status in the International System Hardback

National and State Identity in Turkey uses the concepts of national and state identity to examine Turkey's domestic and international politics and explain how the country's position in the international system has changed over the last ten years.

State identity is understood as the end result of a transformed national identity, linking both domestic and international levels.

Toni Alaranta argues that there has been a radical reformulation of Turkey's national identity, interest, and positioning in the world since the Justice and Development Party (AKP) came to power in 2002.

This transformed identity has helped the country renegotiate its status in the world.

He first examines the changing nature of Turkey's national identity before looking at the struggle between two extreme positions-secularism and Islamism.

He then explains how the "New Turkey" discourse is part of an Islamic-conservative ideology that targets the notion of the "domestic other," or minorities, versus the Turkish-Muslim "self." This discourse is transforming not only the notion of national identity but also Turkey's relations with the rest of the world, and particularly with the European Union.