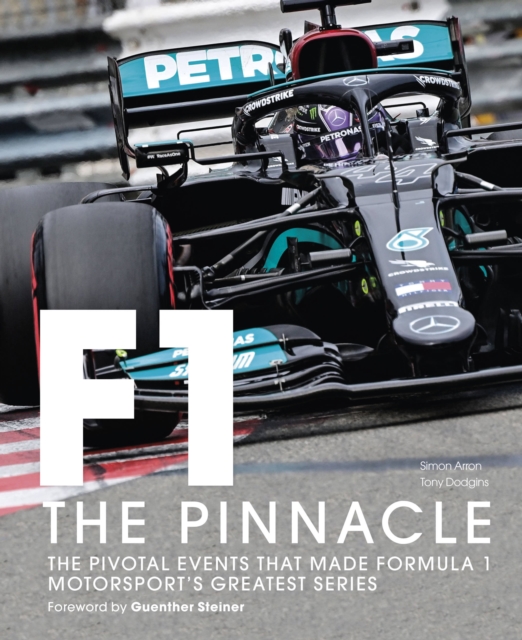 Formula One: The Pinnacle : The pivotal events that made F1 the greatest motorsport series Hardback

With a foreword by Guenther Steiner - Team Principal of the Haas Formula One Team, Formula 1: The Pinnacle tracks a history of the changes which have taken F1 from its rudimentary beginnings to the exhilarating high octane spectacle it is today. The biggest change in a generation is coming to F1 in 2022.

Technical changes aimed at levelling the playing field for the teams combined with the sport's tightening budget cap will make the races closer than ever.

There will be more sprint races - trialled in 2021 - and greater fan interest driven by Netflix's hugely successful 'Drive to Survive' series. So, how did we get here? How did F1 become the acknowledged 'Pinnacle of Motorsport'?

Simon Arron and Tony Dodgins have identified the 100 most significant changes to the series since its inception in 1950.

Formula One is unrecognizable from its debut season, where drivers raced around on old bomber training aerodrome in Northamptonshire with oil drums to mark the corners and straw bales the only concession to safety. New fans will welcome a complete and highly illustrated guide to the history of F1, while older fans will be able to compare their own views of what were the pivotal moments of change, in a book written by experienced motoring writers with two lifetimes worth of knowledge of the sport. The book will link technical progress with the personalities involved, indeed many of the swiftest changes have come about as a result of accidents or tragedies - the death of Roland Ratzenberger at Imola in 1994, the same weekend as Ayrton Senna, could have been avoided by the HANS safety device.

The introduction of the halo saved Romain Grosjean's life in Bahrain last year, but only came about because of the tragic accident that claimed Jules Bianchi in Japan. Along with changes to circuits and the technology of the cars, this book highlights the commercial changes and the controversies that threatened to split the sport apart - such as the threat of breakaway series proposed at various times by teams. A must-read for completists or for those new to the sport, F1: The Pinnacle is a fascinating insight into one of the most exciting and dangerous sports in the world.