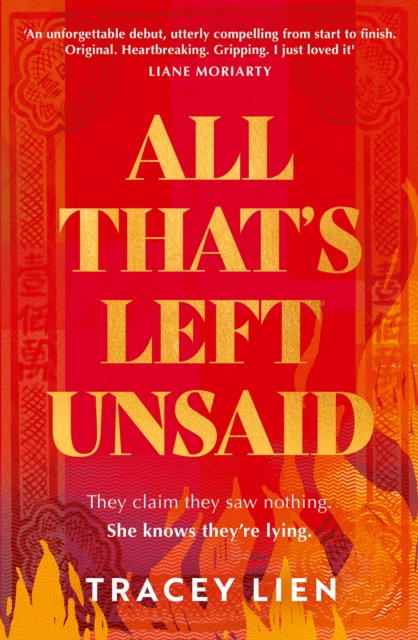 'A vivid portrait of life as a refugee in 1990s Australia . . . Tracey Lien's first novel is a deeply moving tale of rage, regret and resilience . . . A brilliant debut' The Times 'An unforgettable debut, utterly compelling from start to finish. Original. Heartbreaking. Gripping. I just loved it!' Liane Moriarty 'An urgent story that commands an audience.

All That's Left Unsaid is a gripping and unflinching narrative that is as heart-wrenching as it is unputdownable' Karin Slaughter * They claim they saw nothing.

She knows they're lying. 1996 - Cabramatta, Sydney 'Just let him go.' Those are words Ky Tran will forever regret.

The words she spoke when her parents called to ask if they should let her younger brother Denny out to celebrate his high school graduation with friends.

That night, Denny - optimistic, guileless Denny - is brutally murdered inside a busy restaurant in the Sydney suburb of Cabramatta, a refugee enclave facing violent crime, and an indifferent police force. Returning home for the funeral, Ky learns that the police are stumped by her brother's case.

Even though several people were present at Denny's murder, each bystander claims to have seen nothing, and they are all staying silent. Determined to uncover the truth, Ky tracks down and questions the witnesses herself.

But what she learns goes beyond what happened that fateful night.

The silence has always been there, threaded through the generations, and Ky begins to expose the complex traumas weighing on those present the night Denny died.

As she peels back the layers of the place that shaped her, she must confront more than the reasons her brother is dead. And once those truths have finally been spoken, how can any of them move on? * 'A complex, harrowing look into the impacts on trauma on a community, written with the urgent pace of a thriller and peppered with moments of levity' Vogue Australia 'While the mystery is compelling, like the richest literary crime fiction, this story has broader ambitions than revealing who did it . . . Poignant and impeccable storytelling' Oprah Daily 'A mystery that is both suspenseful and lyrical, All That's Left Unsaid marks out Lien as a debut novelist to watch' i