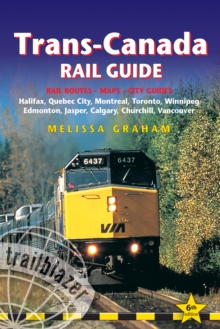 The world's most scenic rail ride. A journey on Canada's transcontinental railroad ranks as one of the greatest rail experiences in the world.

Stretching from the Atlantic to the Pacific, the lines span 3974 miles, taking in not only several of North America's finest cities but also some of the most dramatic scenery on earth, including the spectacular Rocky Mountains. * Fully revised 6th edition - entirely re-researched. * Mile-by-mile route guide - what to see along the route, with 32 rail route maps. * Rail travel for all budgets - information from the cheapest rail tickets with shoestring accommodation in the cities along the route to the most luxurious guided tours. * City guides and maps - the best sights, recommended hotels and restaurants in 10 major stops along the lines: Halifax, Quebec City, Montreal, Toronto, Winnipeg, Edmonton, Jasper, Calgary, Churchill and Vancouver. * Railway history - the rail link that created modern Canada.