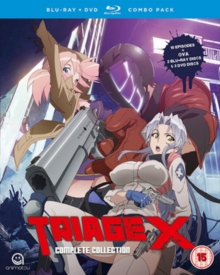 All ten episodes, as well as the OVA episode, from the first season of the anime based on the manga by Shouji Satou.

With no family or friends left, Arashi is taken in by the surgeon who saved his life.

The surgeon, however, is not all he seems; secretly, he is also at the head of a vigilante group called Black Label which seeks out and exterminates the very worst criminals society has to offer, dubbing them a cancer of society.

Arashi joins the team and fights alongside them for justice and for vengeance.

The OVA episode is 'Recollection XOXO'.