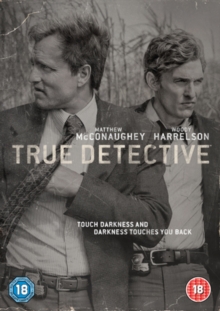 All eight episodes of the critically-acclaimed US television series starring Matthew McConaughey and Woody Harrelson.

The episodes are: 'The Long Bright Dark', 'Seeing Things', 'The Locked Room', 'Who Goes There', 'The Secret Fate of All Life', 'Haunted Houses', 'After You've Gone' and 'Form and Void'.