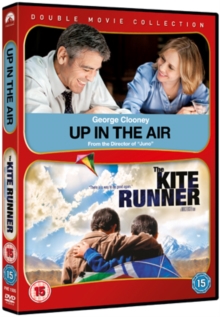 Up in the Air/The Kite Runner DVD

Double bill of dramas adapted from novels. George Clooney stars in the satirical comedy drama 'Up in the Air' (2009), based on the novel by Walter Kirn.

Ryan Bingham (Clooney) is a corporate downsizing expert - in other words, his job is to fire people from theirs - and he takes his job very seriously.

He travels the length and breadth of the country, racking up air miles and living out of a suitcase, and relishing every moment of it.

When his job and way of life come under threat by new centralised procedures implemented by his hotshot colleague Natalie (Anna Kendrick), Ryan determines to show her just how valuable his role is - but instead ends up facing up to some of the pitfalls of his lifestyle.

The film won the 2010 BAFTA for Best Adapted Screenplay.

Marc Forster directs 'The Kite Runner', an adaptation of Khaled Hosseini's bestseller about one man's search for redemption from a childhood betrayal in his native Afghanistan.

Childhood friends Amir (Zekeriah Ebrahimi) and Hassan (Ahmad Khan Mahmidzada) spend their days on the streets of Kabul getting up to mischief and eagerly awaiting the spectacular kite-fighting contests.

But the joyous excitement of the day is ruined by a shocking act that changes the two boys' relationship forever, with Amir leaving soon after to live in America, just as the threat of war becomes a grim reality. 20 years later, and still haunted by the past, Amir (played as an adult by Khalid Abdalla) returns to Afghanistan, now in the grip of the Taliban, determined to finally redeem himself.