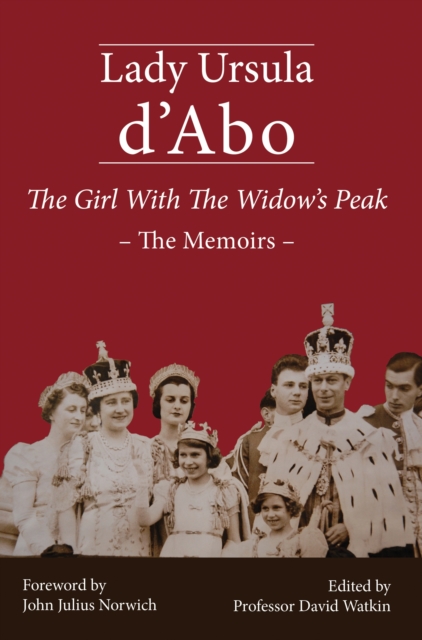 The Girl with the Widow's Peak : The Memoirs Hardback

Born in November 1916 to the Marquess and Marchioness of Granby, Lady Ursula was a sprightly and charming lady whose memoirs of her uniquely glamorous life make riveting reading.

Describing herself as having been an observant child, she records life at Belvoir Castle, Leicestershire, as maintained on a feudal scale until September 1939.

Her vivid accounts include the numerous servants and their roles from liveried footmen to the pig man.

She also describes her close relationship with her father who succeeded as 9th Duke of Rutland in 1925, and whom she helped as a girl in his sensitive restoration of another Manners family seat, the mediaeval Haddon Hall, Derbyshire.

We hear of her coming-out Ball at Belvoir Castle in 1934 at the age of seventeen and her role in the Coronation of King George VI and Queen Elizabeth in 1937.

Dressed by Norman Hartnell, she was one of the Six Maids of Honour who bore the Queen's train in Westminster Abbey.

In 1938 she accompanied the new King and Queen on their triumphant first state visit to Paris and Versailles.

By contrast, her war work was soon to include being in charge of hundreds of women at a munitions factory in Springfield, Grantham. Her activities here were described in letters which her celebrated aunt, Lady Diana Cooper, wife of Duff Cooper, 1st Viscount Norwich, sent to their son, John Julius, while a schoolboy.

They are quoted here by his kind permission. Lady Ursula recalls her close friendships with men as varied as Rex Whistler, the Maharajah of Jaipur and Paul Getty.

The story told is unforgettable, and though it has touches of Brideshead and Downton Abbey, it is utterly novel for, unlike them, it is actually real.