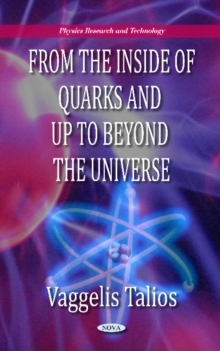 From the Inside of Quarks & Up to Beyond the Universe Hardback

This book examines the physical phenomena related to the existence, the creation and the functioning of the material part, our Universe and the Cosmos.

Also described herein is the human perception of the Cosmos and the Universe as we know them today, and the existing cosmological ideas about the creation.

This book suggests the theory of "pointal charges" for the completion or replacement of the most prevailing theories until now because this theory explains the formation and the evolution of the Universe in a more convincing way.

In the last two chapters, the reader will find the summarised answers according to the theory of pointal charges of some, still today, unresolved questions of creation (such as: where have the huge amounts of energy that exist in the universe been found?).

From Elementary Particles to the Limits...