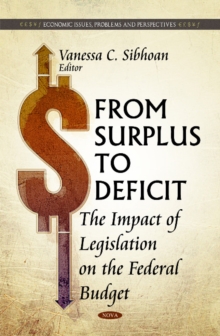 From Surplus to Deficit : The Impact of Legislation on the Federal Budget Hardback

The annual federal budget deficit is the amount by which federal government outlays exceed revenues for a given fiscal year, with surpluses generated when revenues exceed outlays.

During an economic downturn, budget deficits could be viewed as effective fiscal policy, with lawmakers enacting tax cuts and increasing federal spending to simulate economic activity.

This book examines to what extent major legislative changes from 2001 to 2009 caused the budget to move from surplus to deficit.