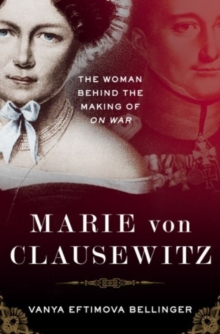 Marie von Clausewitz : The Woman Behind the Making of On War Hardback

The marriage between Carl von Clausewitz and Countess Marie von Bruhl was a remarkable intellectual partnership.

Many historians have noted the instrumental role Marie played in the creation, development, and particularly in the posthumous editing and publishing of Clausewitz's opus, On War, which remains the seminal text on military theory and strategic thinking.

Highly intelligent and politically engaged, Marie was also deeply involved in herhusband's military career and advancement, and in the nationalist politics of 19th-century Prussia.

Yet apart from peripheral consideration of her obvious influence on Clausewitz and on the preservation of his legacy, very little has been written about Marie herself.

In Marie von Clausewitz, Vanya Eftimova Bellinger proposes to address this oversight, capitalizing on the recent discovery of a vast archive of material-including hundreds of previously unknown letters between Marie and Clausewitz-to produce the first complete biography of this understudied figure.

Delving into the private correspondence between the two, Bellinger shows how Marie, a highly educated woman of Prussia's upper echelon, broadened Clausewitz's understanding of the culturaland political processes of the time; provided him with insights into the practical side of daily politics; sharpened his writing style; and served as the catalyst for his ideas.

The depth of her influence on and contribution to Clausewitz's theoretical writings, Bellinger argues, is greater than historianshave previously suggested.

Bellinger also establishes Marie as an impressive figure in her own right, both politically outspoken and socially adept at moving among the ranks of Prussian nobility.

The marriage between Marie, an intimate of the royal family, and Clausewitz, an obscure young lieutenant with dubious claims to nobility, allows Bellinger to engage in a broader discussion of gender and class relations in 19th-century Europe; and her study of their epistolary debates also sheds lighton the political climate of the time, particularly incipient German nationalist fervor.