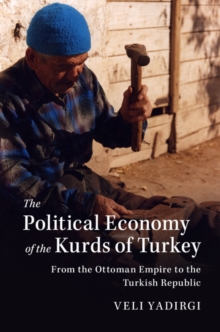 The Political Economy of the Kurds of Turkey : From the Ottoman Empire to the Turkish Republic Paperback / softback

by Veli (School of Oriental and African Studies, University of London) Yadirgi

In recent years, the persecution of the Kurds in the Middle East under ISIS in Iraq and Syria has drawn increasing attention from the international media.

In this book, Veli Yadirgi analyses the socioeconomic and political structures and transformations of the Kurdish people from the Ottoman era through to the modern Turkish Republic, arguing that there is a symbiotic relationship between the Kurdish question and the de-development of the predominantly Kurdish domains, making an ideal read for historians of the region and those studying the socio-political and economic evolution of the Kurds.

First outlining theoretical perspectives on Kurdish identity, socioeconomic development and the Kurdish question, Yadirgi then explores the social, economic and political origins of Ottoman Kurdistan following its annexation by the Ottomans in 1514.

Finally, he deals with the collapse of the Ottoman Empire, and the subsequent foundation and evolution of the Kurdish question in the new Turkish Republic.