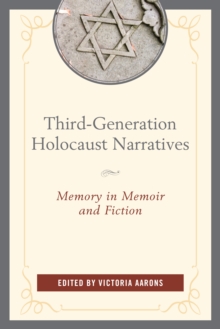 This collection of new essays examines third-generation Holocaust narratives and the inter-generational transmission of trauma and memory.

This collection, in drawing upon a variety of approaches and perspectives, suggests the rich and fluid range of expression through which stories of the Holocaust are transmitted to and by the third generation, who have taken on the task of bearing witness to the enormity of the Holocaust and the ways in which this pronounced event has shaped the lives of the descendants of those who experienced the trauma first-hand.

The essays collected-essays written by renowned scholars in Holocaust literature, philosophy, history, and religion as well as by third-generation writers-show that Holocaust literary representation has continued to flourish well into the twenty-first century, gaining increased momentum as a third generation of writers has added to the growing corpus of Holocaust literature.

Here we find a literature that laments unrecoverable loss for a generation removed spatially and temporally from the extended trauma of the Holocaust.

The third-generation writers, in writing against a contemporary landscape of post-apocalyptic apprehension and anxiety, capture and penetrate the growing sense of loss and the fear of the failure of memory.

Their novels, short stories, and memoirs carry the Holocaust into the twenty-first century and suggest the future of Holocaust writing for extended generations.