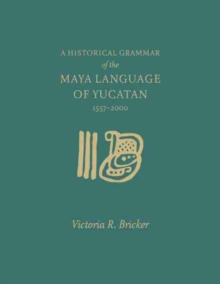 A Historical Grammar of the Maya Language of Yucatan: 1557-2000 Hardback

Victoria Bricker's painstaking work is based on almost one thousand provenienced notarial documents and letters written by native speakers of Yucatec Maya from the colonial times to the modern day. Because the documents are dated and also specify the town where they were written, Bricker was able to determine when and where grammatical changes first appeared in the language and the trajectory of their movement across the Yucatan peninsula.

This exemplary grammar of Yucatec Maya includes examples and careful explanations of the phonological, morphological, and syntactic structures of the language.

Bricker's research is distinguished in its treatment of seemingly aberrant spellings of Maya words as clues to the way they were actually pronounced at different times in the past.

Her chapters include topics seldom covered, such as deictic particles, affects, and reduplication.

Of special interest is a poetic form of reduplication composed of couplets (or triplets) found in documents from each of the centuries, indicating the continuity of this genre from the Colonial to the Modern version of this language. 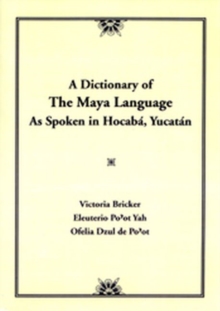 Dictionary Of The Maya Language