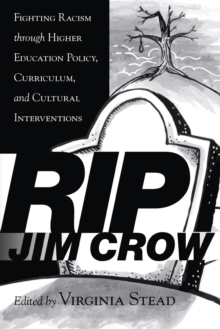 Part of the Equity in Higher Education Theory, Policy, and Praxis series

Together we can build enough momentum to see Jim Crow lying silent and still in his grave. This book shouts out ways that we can and must respond to the sickening accumulation of racially inspired and systemically sanctioned deaths.

Today, we remember the passing of young, Black Michael Brown in Ferguson, Missouri.

In responding to this event, we are determined to dismantle the alexithymia (indifference to the suffering of others) that pervades our campuses.

It is nothing less than a by-product of racism protected by the illusion of democracy. RIP Jim Crow contains three sections: (1) Antiracist Theory and Policy; (2) Antiracist Administration, Curriculum, and Pedagogy; and (3) Antiracist Cultural Interventions. Each of the 31 chapters contributes to the normalization of anti-racist policy within academic institutions, antiracist discourse within academic cultures, and institutional praxis that upholds speaking out against racist activity.

The hope is that this book will also reduce racism in the broader world through academic relationships with community partners.