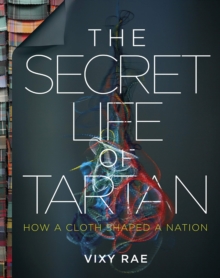 The Secret Life of Tartan Hardback

Tartan is so much more than just a cloth. From its clan origins in the Scottish Highlands to the catwalks of Milan, London and New York, from its regimental history to its anti-establishment status, tartan has not only shaped a nation but has become an international style icon. The Secret Life of Tartan is as colourful and interwoven as the threads of the fabric itself.

From troops in Black Watch tartan controlling Highland rebels to the Balmoral tartan exclusively worn by royalty, from the first tartan on the moon to the pattern of choice for punk and high fashion alike, tartan truly has a remarkable universal status. Today, tartan evokes history, kinship, tradition, romance, irreverence, fashion and style.

The Secret Life of Tartan unravels the truths and the myths of the cloth that shaped a nation to reveal how it has captured hearts around the world. 'There is so much to tartan - there's a stirring and romantic history, a science, and a treasure trove of fascinating stories.

This book is all of that, and more. A delight for the senses.' Alexander McCall Smith'Vixy's energy and passion for provenance jump out from every page - tartan with a tailored twist!' John McLeish, Chairman, The Scottish Tartans Authority'Vixy Rae takes the tat out of tartan and makes you feel resplendently cool and modern.' Shauna Macdonald'Vixy at Stewart Christie has found the missing link, providing a unique bond between our history and traditional customs with a much-needed contemporary feel.

They really capture the essence of Scottish heritage.' Sam Heughan, Outlander star'The premiere of Mary Queen of Scots was one of the most memorable nights I've ever had.

To have the opportunity to celebrate Scottish heritage and design by wearing Vixy's capelet made it even more special!' Saoirse Ronan'Vivienne Westwood reinvented tartan in the 1970s and into the 1980s with her irreverent, but massively stylish, bondage trousers and suits.

Punk not only had a seismic impact on music, but also on fashion and design.' Vic Galloway, BBC broadcaster, author, journalist and musician