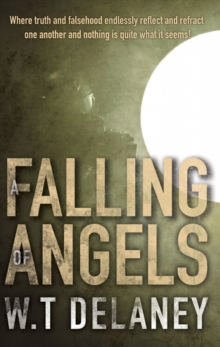 A Falling Of Angels Paperback / softback

'The world of intelligence is a wilderness of mirrors where truth and falsehood endlessly reflect and refract one another and nothing is quite what it seems!' - James Jesus Angleton, CIA A Falling of Angels is the second part of a trilogy of action/adventure novels by W.T.Delaney against the backdrop of the Western world's current struggle against Islamic terrorism. It's London in 2019 and the Islamic State has crumbled and a team of British-born jihadists are on their way home with revenge and mass murder in mind.

When a British agent within the Daesh reveals a suicide bomb plot, Samantha Holloway, an ex-British Army Intelligence Corps operator, and her team of former Special Forces soldiers are contracted by the Security Services to help.

The story unfolds as Sam's team race to prevent the attack against the gripping backdrop of a secret, complex and morally dubious CIA plot, to locate and capture the terrorist mastermind.

Have Sam's team been told the truth as the clock ticks towards an attack on the heart of government?

But when the truth finally emerges she realises that London isn't the only target...