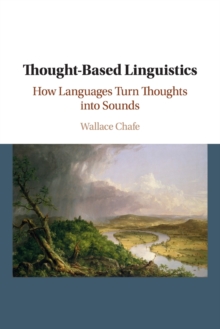 The extent to which language is inseparable from thought has long been a major subject of debate across linguistics, psychology, philosophy and other disciplines.

In this study, Wallace Chafe presents a thought-based theory of language that goes beyond traditional views that semantics, syntax, and sounds are sufficient to account for language design.

This obvious observation is seldom incorporated in descriptions of language design for two major reasons.

First, the role of thought is usually usurped by semantics.

But semantic structures are imposed on thought by languages and differ from one language to another.

Second, thought does not lend itself to familiar methods of linguistic analysis.

Chafe suggests ways of describing thoughts, traces the path languages follow from thoughts to sounds, and explores ways in which thoughts are oriented in time, memory, imagination, reality, and emotions.