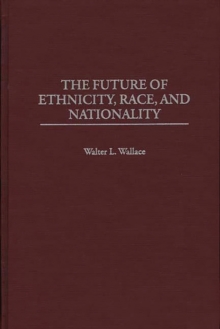 The Future of Ethnicity, Race, and Nationality Hardback

This broad-visioned and insightful book examines the march toward global consolidation of our many ethnic, racial, and nationality groups.

About 100,000 years ago the dispersion of what was then a homogenous human population from its point of origin in Eastern Africa began.

This was slowly followed by the emergence of ethnic and racial differences among the then separated human populations.

The Agricultural Revolution, 10,000 years ago, began the long process of re-establishing contact and eventually consolidating the human species once again, but this time globally. Wallace contends that consolidation will contribute greatly to the survival of humankind by reducing the deadly threats humans pose to each other.

He also argues that ethnic, racial and nationality consolidation does not imply cultural homogeneity; diversity based on interest, vocation, and other factors will serve as even more fertile replacements.

The book is expertly researched.