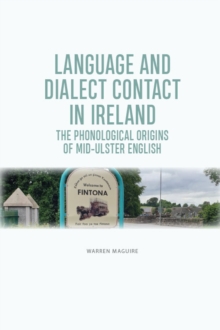 The Phonological Origins of Mid-Ulster English : Language and Dialect Contact in Ireland Hardback

Warren Maguire examines Mid-Ulster English as a key case of new dialect formation, considering the roles of language shift and dialect contact in its phonological development.

He explores the different processes which led to the development of MUE through contact between dialects of English, Scots and Irish and examines the history of a wide range of consonantal and vocalic features.

In addition to determining the phonological origins of MUE, Maguire shows us why the dialect developed in the way that it did and considers what the phonology of the dialect can tell us about the nature of contact between the input language varieties.

In doing so, he demonstrates the kinds of analysis and techniques that can be used to explain the development of extra-territorial varieties of English and colonial dialects in complex situations of contact, and shows that Irish English provides a useful testing-ground for models of new dialect formation. As one of the oldest 'new' extra-territorial varieties of English, one which developed in a context of language and dialect contact, MUE provides an excellent opportunity to study how new dialects develop in situations of settlement colonisation.