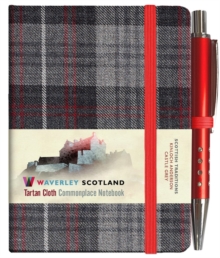 Inspired by Edinburgh Castle, the tartan has four shades of grey with a red and white over check.

This is one of Kinloch Anderson's house tartans range.

The notebook also has a retractable pen. (Pen barrel colour may vary from that illustrated.) Early weavers used local plants and natural products for their dyes so the locality of the weaver affected the colours of the local tartan.

The genuine tartan cloth used for this notebook is supplied by and produced with the authority of Kinloch Anderson Scotland.

Commonplace notebooks date back to the Scottish Enlightenment.

Many thinkers and writers used a Commonplace notebook for writing down ideas and knowledge.