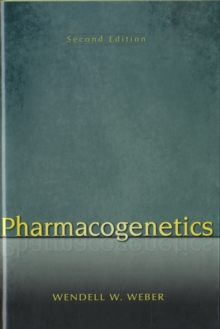 Genes are important modifiers of the human response to drugs, hormones, and toxins.

Medical patients and healthy individuals alike display significant differences in response and suffer adverse effects as a result of exposure to many therapeutic agents and occupational chemicals.

In this new edition Weber brings together laboratory methods and epidemiological studies in defining the role of heredity in human drug response. The book is divided into two major sections, one covering pharmacogenetic concepts and the second the application of those concepts.

The first edition was published in 1997, and a vast amount of new information about the genetics of human drug response has accumulated since then.

In just five years, we have moved from mapping the first complete sequence of a free-living organism to a working draft of the human genome.

The application of tools for analysing genetic variation and the maturationof the human genome initiative has provided a wealth of primary genetic information and functional genomic data to fuel out understanding of genetic variation.

Today, pharmacogenetics comprises a well-integrated network of physicians and scientists worldwide who are attempting to identify variationsin human disease and drug response and how they might use this information to discover new, more effective drugs and avoid unwanted drug responses.

Dr Weber is completely overhauling and updating all discussions to reflect the enormous changes of the past 10 years.

As pharmacogenetics is an even hotter topic than it was in 1997, this new book should have even wider appeal in its second edition.