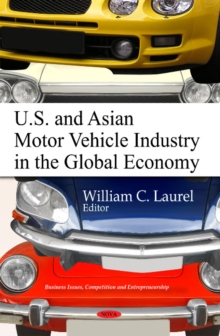 In the past year, the U.S. auto industry has been severely buffeted by three adverse factors: soaring gasoline prices caused motorists to focus more on fuel efficiency; economic recession and growing unemployment reduced demand for new autos; and the near collapse of the commercial credit markets made auto purchases more difficult.

These economic currents led Chrysler to file for bankruptcy at the end of April 2009 and prompted General Motors to suggest that it may follow suit on June 1, 2009.

China's automobile industry has continued to expand despite the global economic downturn.

If such growth continues, China is on its way to becoming the world's largest auto market.

This book explores the U.S. and Asian motor vehicle industries and the global economy.