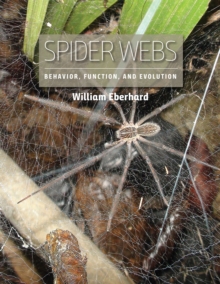 In this lavishly illustrated, first-ever book on how spider webs are built, function, and evolved, William Eberhard provides a comprehensive overview of spider functional morphology and behavior related to web building, and of the surprising physical agility and mental abilities of orb weavers.

For instance, one spider spins more than three precisely spaced, morphologically complex spiral attachments per second for up to fifteen minutes at a time.

Spiders even adjust the mechanical properties of their famously strong silken lines to different parts of their webs and different environments, and make dramatic modifications in orb designs to adapt to available spaces.

This extensive adaptive flexibility, involving decisions influenced by up to sixteen different cues, is unexpected in such small, supposedly simple animals. As Eberhard reveals, the extraordinary diversity of webs includes ingenious solutions to gain access to prey in esoteric habitats, from blazing hot and shifting sand dunes (to capture ants) to the surfaces of tropical lakes (to capture water striders).

Some webs are nets that are cast onto prey, while others form baskets into which the spider flicks prey.

Some aerial webs are tramways used by spiders searching for chemical cues from their prey below, while others feature landing sites for flying insects and spiders where the spider then stalks its prey.

In some webs, long trip lines are delicately sustained just above the ground by tiny rigid silk poles. Stemming from the author's more than five decades observing spider webs, this book will be the definitive reference for years to come.