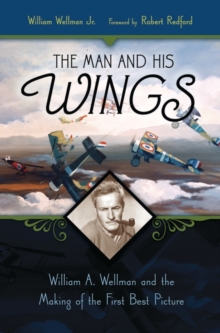 The Man and His Wings : William A. Wellman and the Making of the First Best Picture Hardback

William Wild Bill Wellman was not Paramount Pictures' first choice to direct the World War I epic Wings (1927), but as a former aviator and war hero, he was the right choice.

Despite months waging epic battles of his own with studio executives, Wild Bill managed to finish the big-budget war saga by inventing many of the techniques still used to film aerial battle scenes.

Considered by many to be the last great film of the silent era, Wings has been cited as a major influence on such directors as Martin Scorsese and Robert Redford.

Its director, who went on to direct the likes of John Wayne, James Cagney, and Gary Cooper, later earned an Oscar for writing one of Hollywood's most loved (and often remade) films, A Star is Born.

In this biography, the director's son, William Wellman Jr., reveals the war hero, family man, occasional prankster, and underestimated visionary who changed Hollywood forever. Augmented with personal correspondence from Wellman's own World War I tour of duty as a fighter pilot, on-set photographs from Wings and other classic Hollywood films, and anecdotes from the back lots of the early studio system, this unique work traces the way in which the first Best Picture's director used his own war experience to bring a war epic to the screen.

The versatile director also excelled at comedies such as Nothing Sacred (1937), and had a lasting influence on the gangster genre with The Public Enemy (1931), starring James Cagney.

With the recent release of Wellman's later aviation classics, Island in the Sky (1953) and The High and the Mighty (1954), both starring John Wayne, Wellman is gaining renewed attention and appreciation from a new generation of film enthusiasts.

The book ends with a detailed Filmography of more than 75 classic films directed by Wellman.