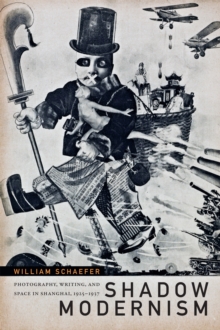 During the early twentieth century, Shanghai was the center of China's new media culture.

Described by the modernist writer Mu Shiying as "transplanted from Europe" and "paved with shadows," for many of its residents Shanghai was a city without a past paradoxically haunted by the absent past's traces.

In Shadow Modernism William Schaefer traces how photographic practices in Shanghai provided a forum within which to debate culture, ethnicity, history, and the very nature of images.

The central modernist form in China, photography was neither understood nor practiced as primarily a medium for realist representation; rather, photo layouts, shadow photography, and photomontage rearranged and recomposed time and space, cutting apart and stitching places, people, and periods together in novel and surreal ways.

Analyzing unknown and overlooked photographs, photomontages, cartoons, paintings, and experimental fiction and poetry, Schaefer shows how artists and writers used such fragmentation and juxtaposition to make visible the shadows of modernity in Shanghai: the violence, the past, the ethnic and cultural multiplicity excluded and repressed by the prevailing cultural politics of the era and yet hidden in plain sight.