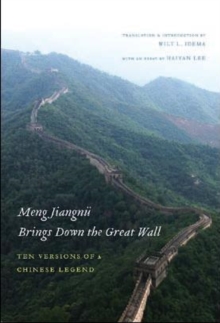 Meng Jiangnu Brings Down the Great Wall brings together ten versions of a popular Chinese legend that has intrigued readers and listeners for hundreds of years.

Elements of the story date back to the early centuries B.C.E. and are an intrinsic part of Chinese literary history.

Major themes and subtle nuances of the legend are illuminated here by Wilt L.

Idema's new translations and pairings. In this classic story, a young woman named Meng Jiang makes a long, solitary journey to deliver winter clothes to her husband, a drafted laborer on the grandiose Great Wall construction project of the notorious First Emperor of the Qin dynasty (BCE 221-208).

But her travels end in tragedy when, upon arrival, she learns that her husband has died under the harsh working conditions and been entombed in the wall.

Her tears of grief cause the wall to collapse and expose his bones, which she collects for proper burial.

In some versions, she tricks the lecherous emperor, who wants to marry her, into providing a stately funeral for her husband and then takes her own life. The versions presented here are ballads and chantefables (alternating chanted verse and recited prose), five from urban printed texts from the late Imperial and early Republican periods, and five from oral performances and partially reconstructed texts collected in rural areas in recent decades.

They represent a wide range of genres, regional styles, dates, and content.

From one version to another, different elements of the story--the circumstances of Meng Jiangnu's marriage, her relationship with her parents-in-law, the journey to the wall, her grief, her defiance of the emperor--are elaborated upon, downplayed, or left out altogether depending on the particular moral lessons that tale authors wished to impart. Idema brings together his considerable translation skills and broad knowledge of Chinese literature to present an assortment of tales and insightful commentary that will be a gold mine of information for scholars in a number of disciplines.

Haiyan Lee's essay discusses the appeal of the Meng Jiangnu story to twentieth-century literary reformers, and the interpretations they imposed on the material they collected.